In the process of energy transformation, increasing the proportion of renewable energy supplying power to the grid means that the amount of generated power will be affected by weather, making it difficult to control. To improve grid stability and renewable energy utilization, smart grids must be developed and paired with energy storage systems to regulate and dispatch electricity efficiently. This can largely be achieved by storing surplus wind and solar energy in an energy storage system. For industrial and corporate users, such systems serve multiple purposes, including peak shaving, optimizing contract capacity, and providing backup power. This approach energy management is widely considered the most versatile green energy strategy.

One success case often referred to when discussing energy policies is Germany. In 1990, the German government began supporting the development of renewable energy, launching a series of policies that succeeded in triggering a rapid increase in the capacity of renewable energy devices. As of 2018, renewable energy has accounted for 35% of electricity generated in Germany, which is almost as high as that generated by coal-fired power.

Although Germany experienced power failure dozens of times daily in the early stage of their energy transition, this situation has gradually been resolved. According to the latest data, the System Average Interruption Duration Index (SAIDI) of Germany in 2018 was 13.91 minutes, marking a 35% reduction compared to the 21.53 minutes recorded in 2006. The German government maintains that gradually introducing smart grids has been critical in improving their grid stability.

There are key differences between conventional grids and smart grids. Conventional grids are a one-way electricity transmission system. From electricity generation and transmission to distribution and to consumption, a considerable amount of energy is wasted. Also, grid management cannot be digitalized in conventional grids. By contrast, smart grids utilize such technologies as digital communication, power electronics, and advanced materials to achieve grid automation and informatization. Smart grids can also increase the load-bearing capacity of an electricity network. In the long run, they can not only incorporate electricity equipment management and transformer loading, but they can also effectively prevent power theft.

Smart grids have also broadened the roles of electricity users and generators from the consumer side. For example, consumers can now utilize distributed energy generation systems to generate electricity and provide power to the grid, making possible the bi-directional transmission of both electricity and information. Moreover, increases in demand from remote areas, powerless populations, offshore islands, and emergency power mean that conventional grids are no longer viable solutions. This demonstrates just how critical it is to construct smart grids and microgrids.

As a part of upgrading conventional grids to smart grids, energy suppliers must implement energy storage systems to mitigate dynamic imbalances between power supply and demand, from generation and transmission to distribution and consumption. This is essential for maintaining highly efficient and stable grid operations. Moreover, energy storage systems can yield multiple application benefits. They can minimize power supply fluctuations from integrating renewable energies into the grid, help with grid stability, adjust the loading between peak and off-peak times, and maintain balance between electricity supply and demand.

For example, during the electricity generation process, in addition to utilizing automatic generation control (AGC) systems for power–frequency regulation, renewable energy plants can leverage energy storage systems for PV smoothing. This eliminates the effect of changes in weather conditions on power generation and their impact on the grid. Electricity transmission networks also require backup power and automatic frequency control (AFC) to ensure stable grid voltage and frequency in addition to smooth power transmission. 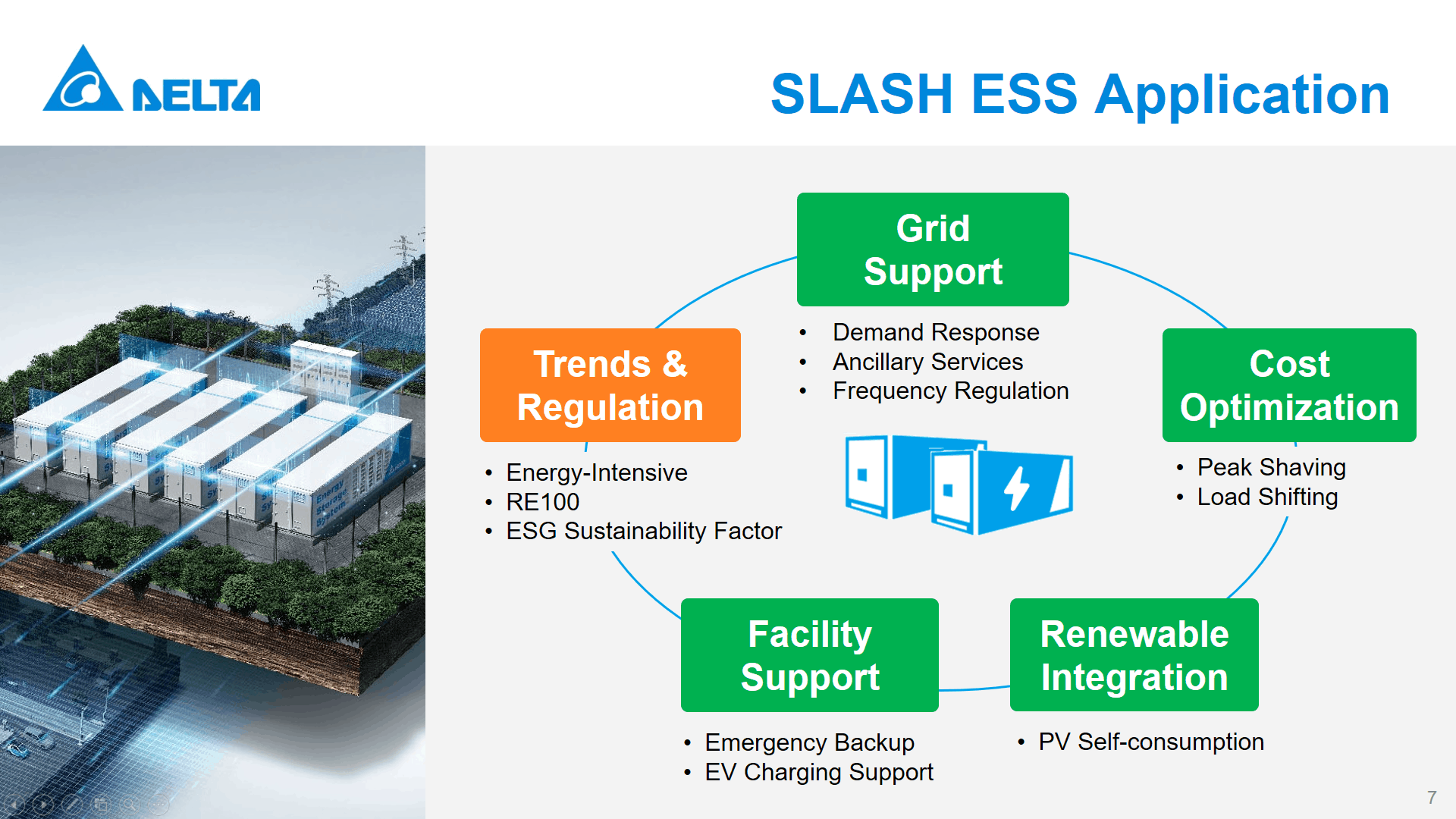 In addition to helping the grid, energy storage systems can also assist factories with integrating renewable energies such as PV power, allowing them to optimize their electricity expenses. In Taiwan, energy storage systems play a critical role in helping businesses meet the required 10% contract capacity set out in the Renewable Energy Development Act.

The so-called optimization of electricity expenses refers to charging an energy storage system during off-peak hours and then using that stored power when demand is high, thereby preventing fines from exceeding the contracted capacity. In the long run, the optimal capacity can be identified to reduce overall electricity expenses. In addition, energy storage systems can aid factories by providing a source of emergency backup power in the event of a power supply interruption.

Given that both an uninterruptible power supply (UPS) system and power conditioning system (PCS) can provide emergency backup power, many people wonder how they differ. In simple terms, a UPS is designed for highly critical facilities. Because a UPS is connected in series between the grid and the load, it can utilize AC/DC rectification and DC/AC inversion to seamlessly switch to its internal power supply when an input power interruption occurs, thus ensuring continual power.

By contrast, a PCS is intended to regulate the overall electricity and is part of an energy storage system. When insufficient electricity supply results in a drop in the frequency to the grid, the PCS injects electricity from the energy storage system to restore the required frequency. Alternatively, the PCS can absorb and store excess electricity that would cause an increase in frequency. A PCS uses a single module for bi-directional charging and discharging. Its design is for the grid and specific regions, not for the emergency supply of electricity for a single machine. Thus, a PCS differs from a UPS. Furthermore, a PCS requires 0.2 seconds as backup.

Safety Challenges in the Design of Stationary Energy Storage Systems

How can energy storage amplify your solar projects in India?

Vivitek Innovative Collaboration and Presentation Solution: Back to University in the New Way with Passion, Motivation and New Regulation